This is the true and genuine documentary movie of Nanjing City after the Battle of Nanjing in 1937.

Like many pictures obviously show restoration of order in the Safety Zone immediately after the seizure of Nanjing, every scene of the documentary film also shows the public peace and order, especially the scene Chinese citizens rushing to get Japanese ID cards. These photos and films are made by the trustworthy sources and coincided with the witness of over 100 Japanese correspondents dispatched to Nanjing then.

The false claim saying that an average 6,000 citizens of Nanjing were slaughtered a day and the remains were burnt by kerosene within and near such a narrow city as Nanjing, the area of which is about ten times as large as Central Park in New York, is absolutely incompatible with what these photos and films show.
Of course, nobody watched any smoke around there. 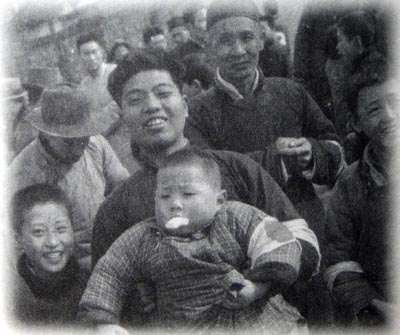 (47:00)The sound of firecrackers, and the video shows the faces of the children.
Chinese children playing with firecrackers which could have been easily mixed up gun fighting in such a situation like after the Battle of Nanjing is an evidence of the public peace and order. There is no fear in their faces even when the two soldiers in Japanese Army Uniform passed by among them.